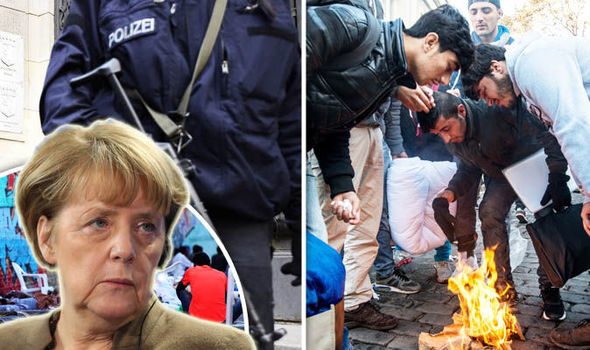 Translations of this item:. Native residents and business people are being intimidated and silenced The reasons for this: the high rate of unemployment, the lack of job prospects for immigrants without qualifications for the German labor market and ethnic tensions among migrants.

But of course we know where we can go with the police car We know that these areas exist. Even worse: in these areas, crimes no longer result in charges.

They are left to themselves. Only in the worst cases do we in the police learn anything about it. The power of the state is completely out of the picture.

The brutality with which they carry out their activities has made them very powerful, the police are afraid of them. The state is passive with respect to these clans, the politicians ignore the phenomenon This negligence has, over the years, enabled the emergence of a criminal parallel society.

This would not have happened if the authorities had acted early and decisively. But order is exactly what is needed. Spiraling levels of violent crime perpetrated by immigrants from the Middle East and the Balkans are turning parts of Duisburg, a key German industrial city, into "areas of lawlessness" — areas that are becoming de facto "no-go" zones for police, according to a confidential police report that was leaked to the German newsmagazine Der Spiegel.

The report, produced by the police headquarters of North Rhine-Westphalia, the most populous state of Germany and also the state with the largest Muslim population in Germany , warns that the government is losing control over problem neighborhoods and that the ability of police to maintain public order "cannot be guaranteed over the long term.

Duisburg, which has a total population of around ,, is home to an estimated 60, mostly Turkish Muslims, making it one of the most Islamized cities in Germany.

In recent years, however, thousands of Bulgarians and Romanians including Sinti and Roma "gypsies" have flocked to Duisburg, creating a volatile ethno-religious cauldron.

Native residents and business people are being intimidated and silenced. People taking trams during the evening and nighttime describe their experiences as 'living nightmares.

The Duisburg police department now wants to reinforce its presence on the streets and track offenders more consistently. The president of the German Police Union, Rainer Wendt, told Spiegel Online years ago: 'In Berlin or in the north of Duisburg there are neighborhoods where colleagues hardly dare to stop a car — because they know that they'll be surrounded by 40 or 50 men.

The leak of the document comes amid a spike in attacks on police by mobs of immigrants, not only in Duisburg, but across the country.

In the Duisburg neighborhood of Marxloh, for example, a horde of Lebanese immigrants on June 29 attacked two police officers who were attempting to arrest two men for smoking cannabis on a public sidewalk.

Within minutes, the officers were surrounded by more than men who tried to prevent the arrests from taking place. Ten squad cars and dozens of police reinforcements were required to rescue the two officers.

Also in Marxloh, two men who got into a fight on June 24 used their cellphones to call their friends for backup support. Within minutes, more than people had gathered at the scene.

At least police officers attempted to separate the two groups, but the mob quickly turned on the police. According to Duisburg police spokesperson Ramon van der Maat, "It happens time and time again, we are called to an incident that at first does not seem so bad.

But then we need nine, ten or eleven police cars to restore order. In Gelsenkirchen, another city in North Rhine-Westphalia, two police officers on July 24 tried to pull over a driver who ran a stoplight.

The driver got out of the car and attempted to flee on foot. When police caught up with him, more than 50 people appeared from virtually nowhere to prevent the suspect's arrest.

A year-old attacked a policeman from behind and began strangling him, rendering him unconscious. Massive amounts of police reinforcements and pepper spray were needed to bring the situation under control.

In Berlin, some 30 members of rival immigrant gangs got into a fight on June 24 outside a nightclub in the Neukölln district of Berlin. After police arrived, the mob began attacking the officers.

The melee began when two young boys got into a fight, which quickly spiraled out of control after adult family members got involved on behalf of each of the boys.

One day earlier, more than 90 police officers were deployed to break up a fight between 70 members of rival immigrant clans at a public playground in Moabit, an inner city neighborhood in Berlin.

The fight began when two women got into an argument over a man, and turned violent after more and more family members got involved. Two police officers were injured.

On June 8, more than 50 police officers were deployed to break up a brawl at a wedding reception for Bosnian immigrants in the Tempelhof district of Berlin.

The melee began when two wedding guests got into an argument that led to fisticuffs. Within moments, more than a dozen other people joined in.

As soon as the police arrived, however, the rival clans stopped fighting each other and began attacking the officers. One of the wedding guests hit a police officer over the head with a chair; the officer was critically wounded.

Other officers were attacked with bottles, while still others were spit upon and verbally abused. In an interview with the German newsmagazine Focus , the head of the police union in North Rhine-Westphalia, Arnold Plickert, warned of the emergence of no-go zones in the cities of Cologne, Dortmund, Duisburg and Essen.

In an August interview with the newspaper Der Westen , Bernhard Witthaut, Chief Police Commissioner of Germany, revealed that immigrants have been imposing "no-go" zones in German cities at an alarming rate.

The interviewer asked Witthaut: "Are there urban areas — for example in the Ruhr — districts and housing blocks that are 'no-go areas,' meaning that they can no longer be secured by the police?

But of course we know where we can go with the police car and where, even initially, only with the personnel carrier. The reason is that our colleagues can no longer feel safe there in twos, and have to fear becoming the victim of a crime themselves.

The threat posed by immigrant clans has been growing for many years. In October , Der Spiegel published an article — "Large Arab Families: The State Cowers in Fear of Criminal Clans" — which warned of the emergence in Germany of a "parallel society of criminality" run by "immigrant mafia clans with thousands of members" who are "taking advantage of legal loopholes, social welfare services and international contacts with dominant organized crime groups.

The state is passive with respect to these clans, the politicians ignore the phenomenon. This would not have happened if the authorities had acted early and decisively: As early as , a Commission of the Federal Criminal Police BKA warned that the ethnic groups were out of control and also warned about the so-called Mhallamiye-Kurds [an Arab-speaking ethnic group with roots in southern Anatolia], including the Bremen-based clan known as Family M.

It was said that due to misconceived tolerance, the courts exacerbated the problems with their persistent lenience. The article reveals that some delinquents possess more than a dozen different identities, and that it is common for them to continue collecting social welfare benefits because German privacy laws prevent police from being informed of a suspect's whereabouts.

According to a police investigator interviewed by Der Spiegel , the immigrant clans "view German society as one to be plundered; they see us as born losers.

In her book titled "The End of Patience," the late German juvenile court judge Kirsten Heisig warned about the growing danger posed by the so-called ethno-clans:.